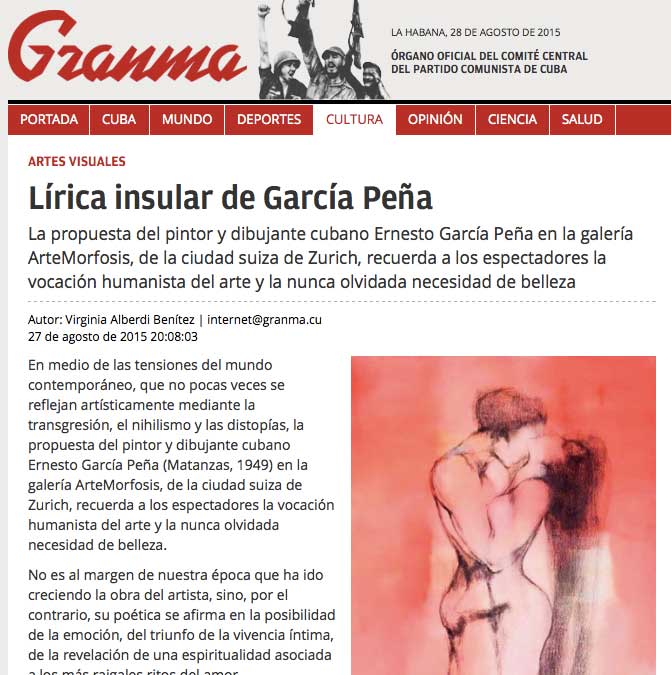 We applaud the article about Ernesto García Peña in granma.cu. It shows that Ernesto is well known an loved in Cuba and postulates that the development of the artist lies not so much in experimentations rather that the real adventure of his art lies literally translated: ‘in the purification of style and image decanting’. 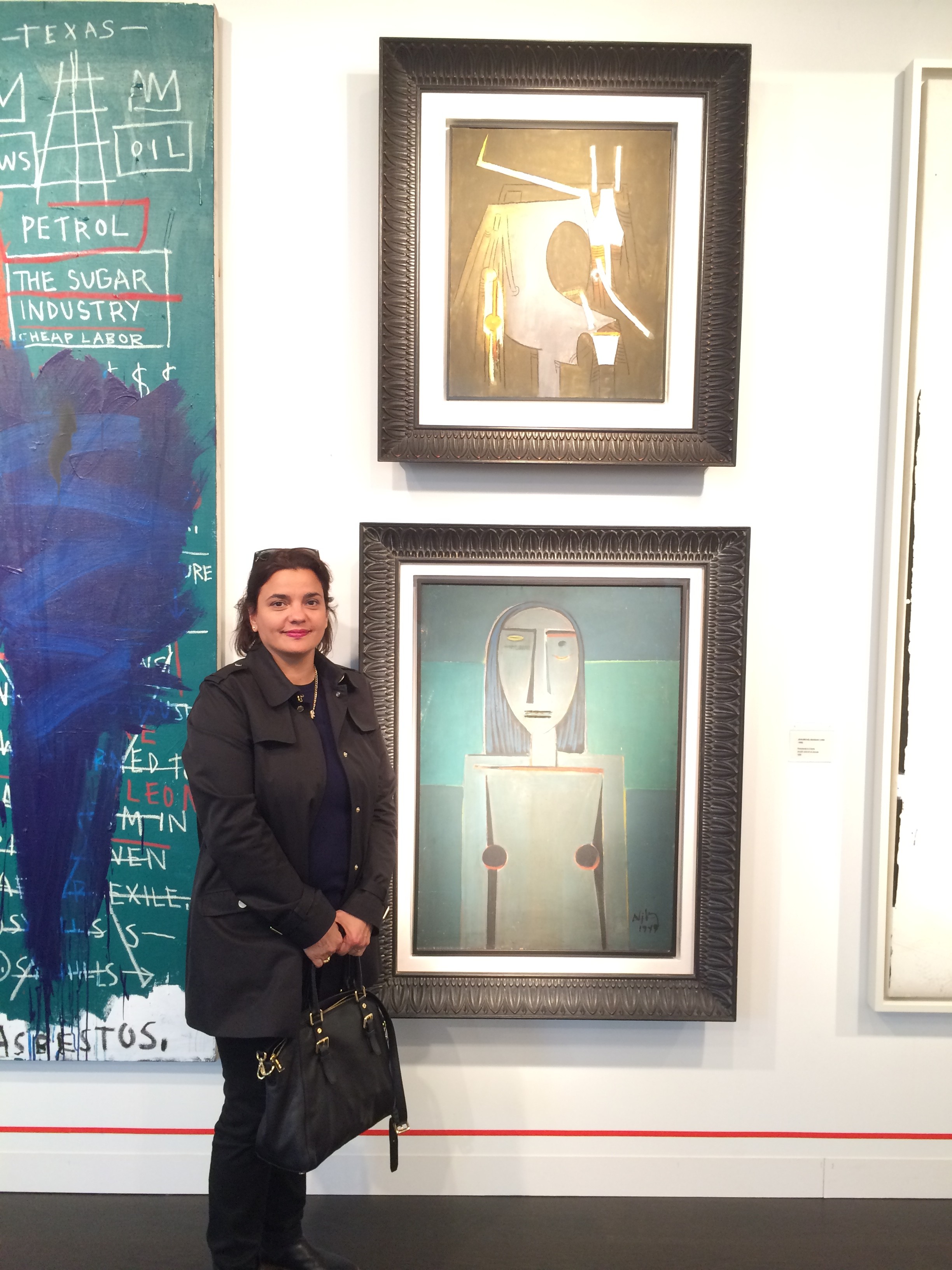 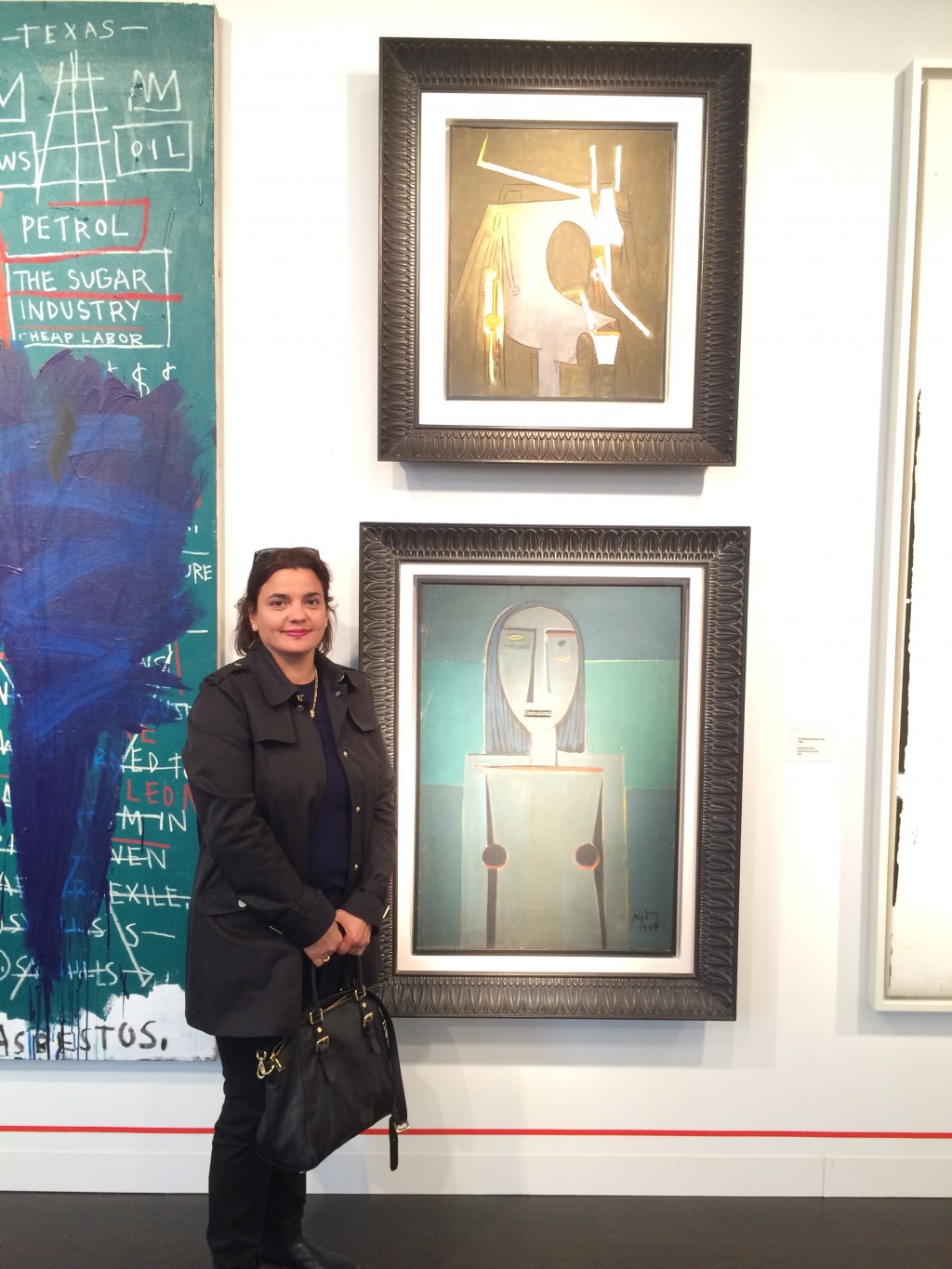 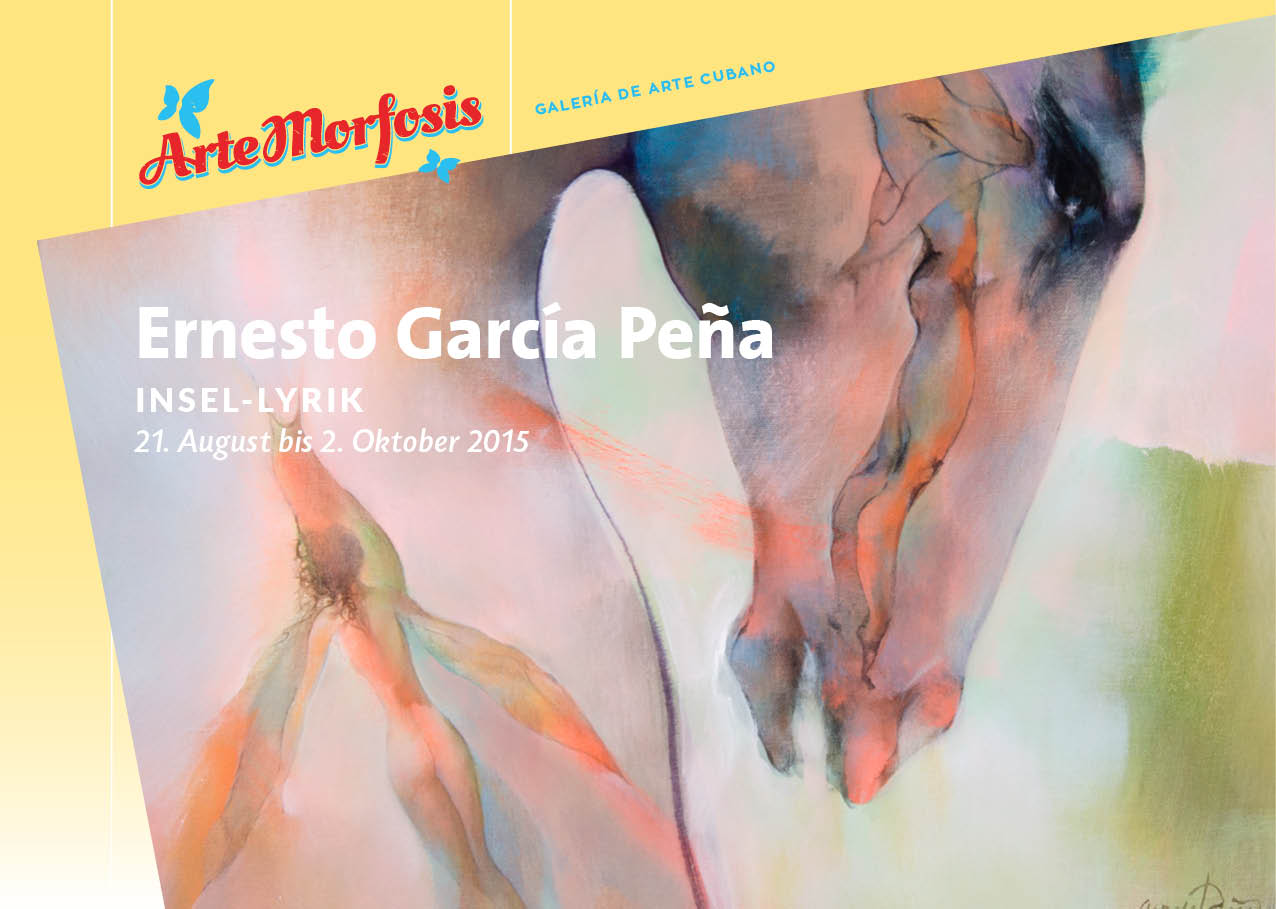 The Poetry of Dreams

Ernesto García Peña (Matanzas, Cuba, 1949) belongs to the first post-revolutionary generation of Cuban artists. The long list of his exhibitions reflects the fact that he is recognized in Cuba as one of the best known and respected artists of his country. Upon completing his studies at the Academy in Havana, he remained as a professor and for many years influenced the generations that followed.

The motifs of his paintings – as evidenced by the title of the exhibition and of the present catalogue – resemble lyrical poetry. Each work is a poem marked by the lyricism and the visual language of dreams, featuring imagination and intuition at its core. Visually, the works are marked by an aesthetic of delicacy and oscillate between the surreal and the abstract. García Peña uses acrylic paint like watercolor and, by aqueous application of the acrylic on the surface with paint brushes and flat brushes, obtains a transparency that is full of light.

The different elements are presented on the canvas as a breeze or distant memory. The paintings nourish from this delicate and yet radiant coloring – mainly in shades of blue, gray or red – from the empty spaces that reveal the beige background, as well as from the overlap of the layers that are often complemented with drawings from above or below. García Peña is “an artist of atmospheres of subtle transparencies…”, which are the result of “a long road of searches and explorations”.1

SEARCH FOR BEAUTY AND HARMONY

The artist focuses on transmitting his emotions and fantasies around hedonistic topics. At the core is the ethi- cal principle of the search of sensual pleasure and enjoyment. His work is an obsessive search of beauty and harmony, however he discloses very little about the content of his creations. He leaves the interpretation of his motifs to the viewers. The titles of the paintings provide a clue towards a possible reading of the artist’s intent since García Peña names his work after completion. 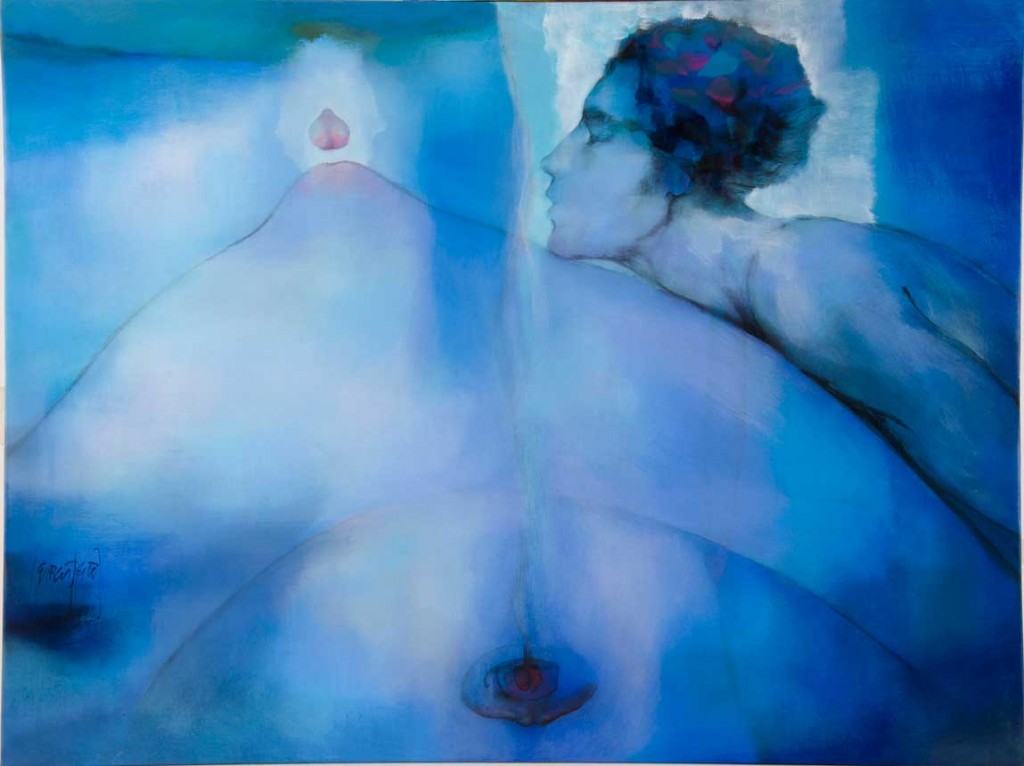 Cuando todo comienza ( When Everything Begins)

Cuando todo comienza (When Everything Begins) shows two hills that represent the oversized breasts of a woman. On one of them lies a naked masculine figure in profile, with eyes closed. He seems to be crawling towards the nipple on his thorax, devotedly inhaling the oncoming fragrance. The stylized igniting spark emerging from one of the nipples recalls the first hours of human life, when the female breast develops from a sensual feminine organ into the first source of nourishment for every human being.

The bull and (more often) the horse, serve the artist as allegories of passion, movement, and virility. While in European iconography the symbolism of the horse depends essentially upon its color – white meaning bearer of light and black, death and ruin2– the Cuban artist is much more interested in the strength and energy that are inherent to this animal. In Móntate y… (Mount and…) a naked woman is levitating with her arms extended backwards within a huge horse head. She is sitting on the shoulders of an equally naked man, who holds her around her legs. 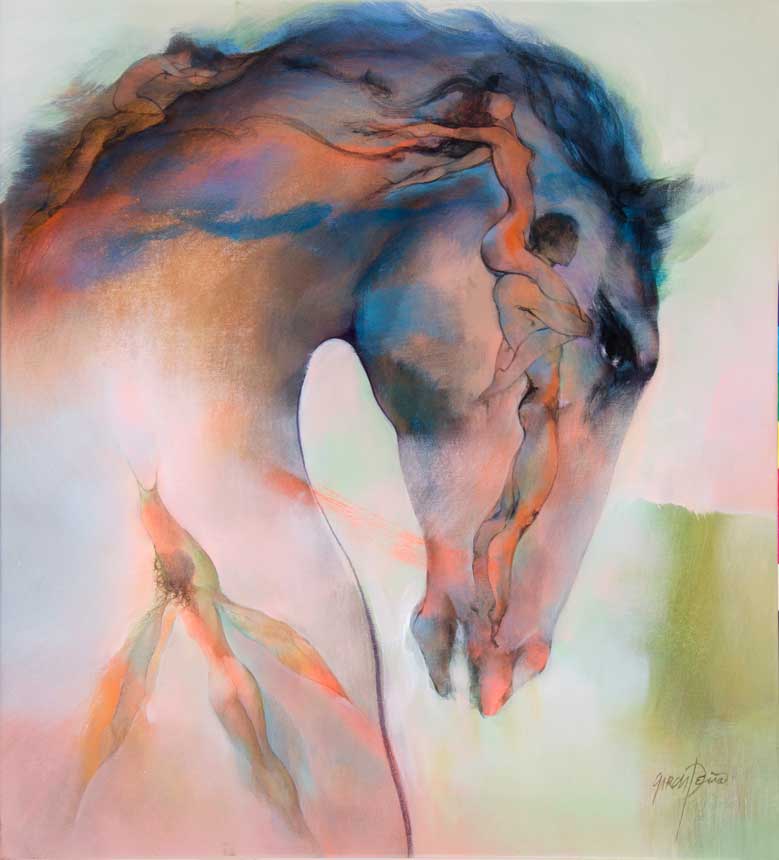 She obviously enjoys the state of unrestrained freedom, as if she was sitting with windswept hair on the bow of a vessel gliding over the sea. On the nape of the horse lies another couple, one person on top of the other, while from the torso an androgynous figure with wings rises toward them. 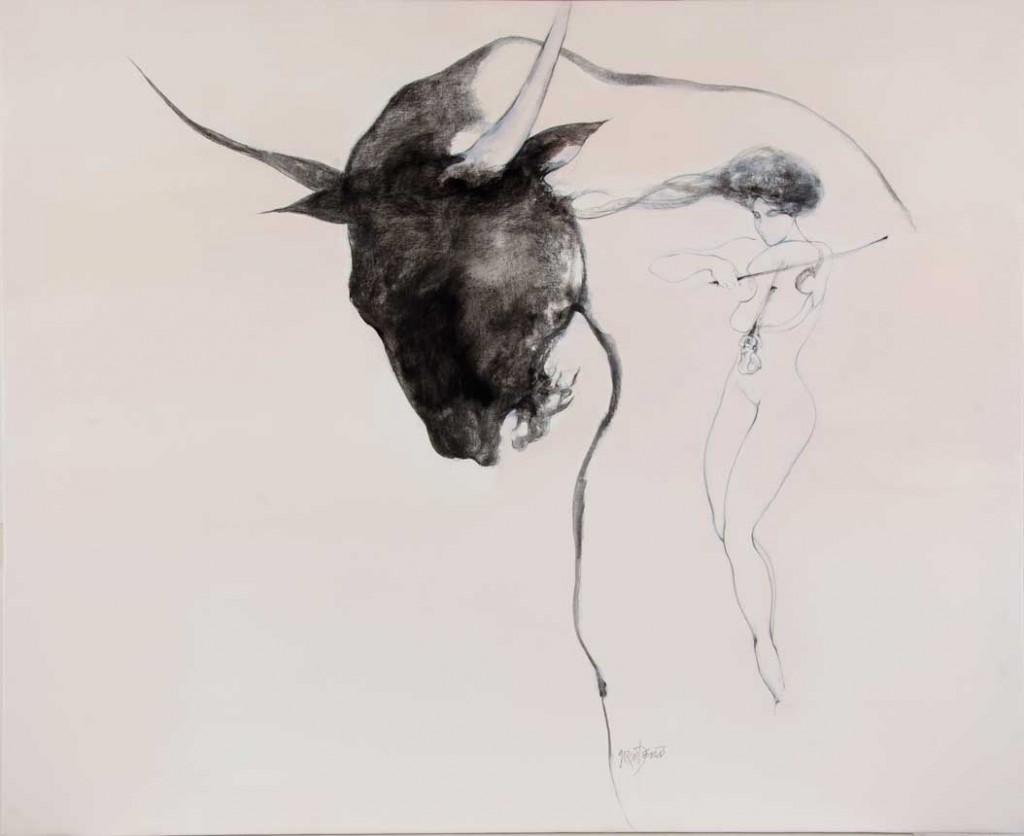 El último canto de la bestia (The Last Song of the Beast) shows a stylized feminine figure playing the violin within the body of a bull, If one understands the bull as masculine, one might be tempted to recall the story of creation in the Holy Scriptures, in which Eve – depending on the translation – was created from a bone (a rib) of Adam.

Generally, Ernesto García Peña works in parallel on several paintings, so that the temporal and visual distance with a painting motif may mature in the artist’s conception. Usually, when he stands before the blank canvas, he already has concrete concepts of what he is going to paint. Later he lets himself be carried away in the process by his in- tuitions. He attempts not to follow predefined processes or procedures in order not to bind or restrict himself. However, he sometimes uses ideas he had before, or resorts to one he had already drawn or sketched at an earlier occasion. The time he takes to complete a painting – which he frequently produces as part of a series – varies according to its development. And, analogous to poetry, short rhymes or longer poems arise, all created in the Caribbean island.

1 According to Cuban art critic Virginia Alberdi. See text on the invitation card to the present exhibition of García Peña in Arte- Morfosis Gallery.

2 See encyclopedia of the iconography: www.beyars.com/kunstlexikon/lexikon_8834.html