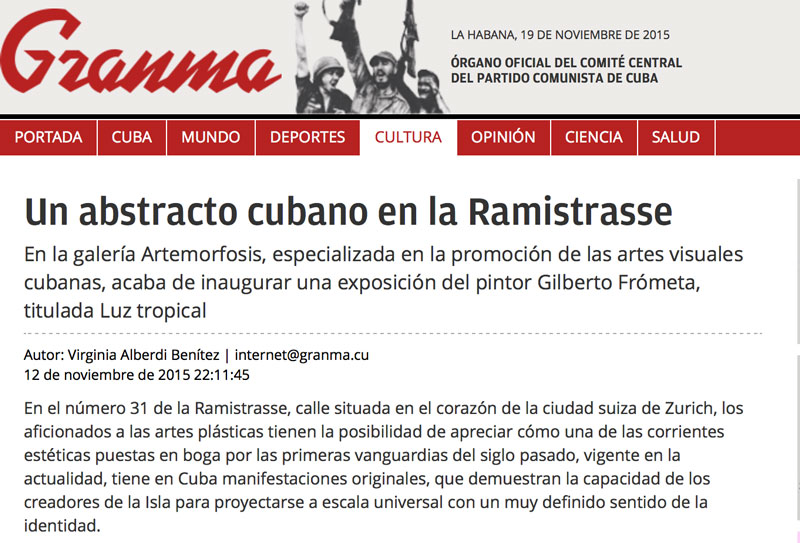 ArteMorfosis is happy to share Virginia Alberdi’s article on Gilberto Frometa’s visit to Zürich as published in the online and paper editions of granma on November 12, 2015 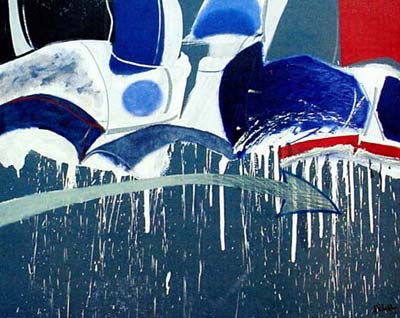 With the presence of the paintings by Gilberto Frómeta in the ArteMorfosis gallery, in Zürich, this November, the art lovers of Switzerland and other countries that visit this singular space for the promotion of the contemporary Cuban art have the opportunity of having access, not only to the creations by one of the most active and consistent painters inside and outside Cuba, but also to the impact of Abstraction, one of the aesthetic tendencies from the artistic avant-garde of the XX Century on the Caribbean island.

Above all, this exhibition should beat prejudices about the cultural reality predominating in a country that adopted Socialism as social system from 1961. In the experience of the Soviet Union after Lenin’s death and of most of the East Europe states created after the defeat of Fascism during the Second World War, as much East Abstraction and other renovating tendencies of Western art were excluded.

In Cuba, the so-called “Socialist realism” was never an official doctrine. On the contrary, a favorable climate was guaranteed to the widest aesthetic options from the beginning, with some tensions in certain moments, but with wide margins of institutional visibility for critical statements.

The Abstraction style emerged about 1910 and according to its consequences has become one of the most significant expressions in the spirit of the XX century. It had set up in Cuba from the fifties, before the rebellious forces entered in Havana in January 1959. However, valuable precedents are found in the work of the avant-garde artists Amelia Pelaez, Marcelo Pogolotti and José Manuel Acosta.

Their imprint was observed from the proximity to the movement that was strengthened in the United States after the end of the war. To be apart from the avant-garde that had appeared in the island from the last 20s to the 50s and showed identity signs through codes similar to the European codes, those artists, pioneers of the Abstraction in Cuba, were inspired by the American Abstract expressionists more than by the European lessons of Mondrian, Leger and Picabia. In fact, a painter of Cuban origin, Julio Girona, resident in the United States and a soldier in Second World War, after returning from the battle fields became affiliated to the abstract art in its informal version.

Seven painters and four sculptors started in April of 1953 when they gathered their works in La Rampa gallery in Havana, an area characterized by constructions of the Modern Movement. This group adopted the generic name of The Eleven: Guido Llinás, Hugo Consuegra,Vila, Antonio Vidal, Fayad Jamis, Tomás Oliva, Agustín Cárdenas, Antonio Díaz Peláez, Francisco Antigua, Viredo Espinosa and José Ignacio Bermúdez, these two last two had an ephemeral stay in the group In the second exhibition, the group included Raúl Martínez, a youth that had just been in the Institute of Design of Chicago and who better translated to his own language the essence of the abstract expressionism before entering with remarkable success in the pop art.

About The Group of the Eleven, Antonio Vidal left the following testimony: “The Group of the Eleven was the result of an encounter of generations. We gathered because we were young and we wanted to break up with what preceded us. We were a group of idealists and we created an art that was not sold and that was not interesting for most of the people. In fact, each one of us had traced his own way, without having any agreement, since we never made a manifesto or called ourselves “The Group of the Eleven”. However, we did have similar ideas on creation because what we really wanted was to make a different art. We were influenced by the North American painting that some of us knew by the Goya and Art News Journals.”

For the following years, the nucleus of The Group of the Eleven turned around Hugo Consuegra, Antonio Vidal, Guido Llinás and Tomás Oliva. Later, Manolo Vidal, Antonia Eiriz, Juan Tapia Ruano and José Rosabal joined in the late 50s. In the abstract orbit, for their bill, they rotated in a certain time, Roberto Diago and Mario Carreño were in the abstract orbit by their own way.

Another interesting landmark was marked by the Group of Ten Concrete Painters that exhibit for the first time in 1958. It was initially composed by Loló Soldevilla, Rafcaael Soriano. Luis Martínez Pedro, Salvador Corratgé, Wilfredo Arcay, Pedro Álvarez, Pedro de Oraá, José Mijares, Sandú Darié and José Menocal. Corratgé said about the genesis of the group: “We also met at Loló Soldevilla’s home. She was a woman that economically helped us very much. She had been a Cultural Consultant of Cuba in France. After the coup d’état in 1952, she returned to Cuba with a great source of information. She brought many books and through her, those of us that didn’t have many possibilities, were updated, differently from Martínez Pedro and Sandu Darié who already had relationships with the French contemporary movements. Loló brought reproductions of Vassarely and of other concrete painters, she herself created geometric painting, and when she showed us the catalogs, to talk to us about the movement existing in Paris, many of us became interested and I myself became enthusiastic about this style of painting.”

Some of the Group of the Eleven and some of the Concrete Painters stayed faithful to their aesthetic beliefs in the middle of the sociocultural transformations that occurred after the drastic political change that took place in Cuba in the 60s. For some people, the abstraction, elements; Antonia Eiriz turned toward a new figuration of expressionist character, Martínez Pedro moved to Optical art and Sandú Darie turned to the Kinetic art. But, for others, like Salvador Corratgé, José Rosabal, Díaz Peláez, Antonio Vidal and Pedro de Oraá – the last two received the National Award of Visual Arts for the work of their whole life- the aesthetic filiation remained unchanged. The internationally well-known sculptor Agustín Cárdenas developed his career in France, but he has kept an unbreakable bond with his homeland. 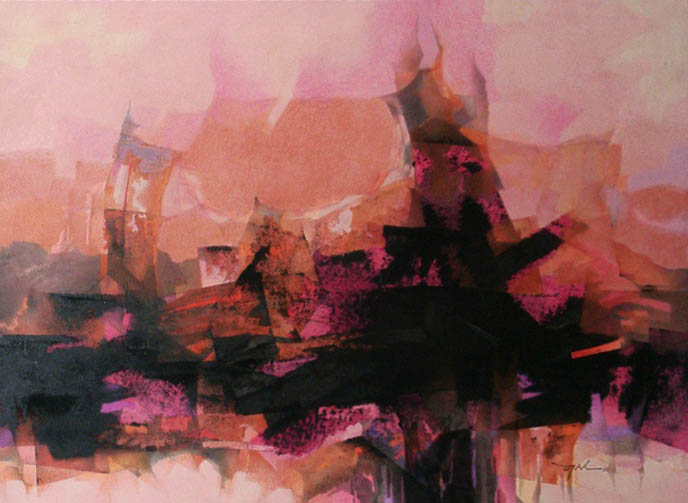 Around 1979, there was a new group, the Cuban Group for Optical Art, integrated by a quartet: Ernesto Briel, Jorge Fornés, Helena Serrano and Armando Morales. But the predominant thing has been the emergency of painters that are themselves convinced that they have expressive personal possibilities in the multiple areas of abstraction

In such a sense, there has been some kind of a generational continuity, among creators, such as Carlos Trillo, Minerva López, Raúl Santoserpa and Juan Vázquez Martin, Gilberto Frómeta, Julia Valdés, Alberto Lescay and the sculptor José Villa, who, in spite of being known by his representations of historical and artistic figures, has an impressive repertoire of abstract works.

It is curious that amid the conceptual and postmodern waves of the last decades of the last century, the abstraction has been present in the works of the very young Carlos García de la Nuez, Eduardo Rubén, the sculptor Tomás Lara, and occasionally, in Flavio Garciandía.

At the crossing from one century to the other, when abstraction was strongly revaluated by the Cuban artists, the work of Rigoberto Mena, Jorge Luis Santos, Manolo Comas and Andy Rivero were highly estimated, and already in the current century, are leaders Ronaldo Encarnacion, Enrique Báster, Danilo Vinardell, Bárbaro Reyes (Pango) y Reyner Ferrer are leaders. 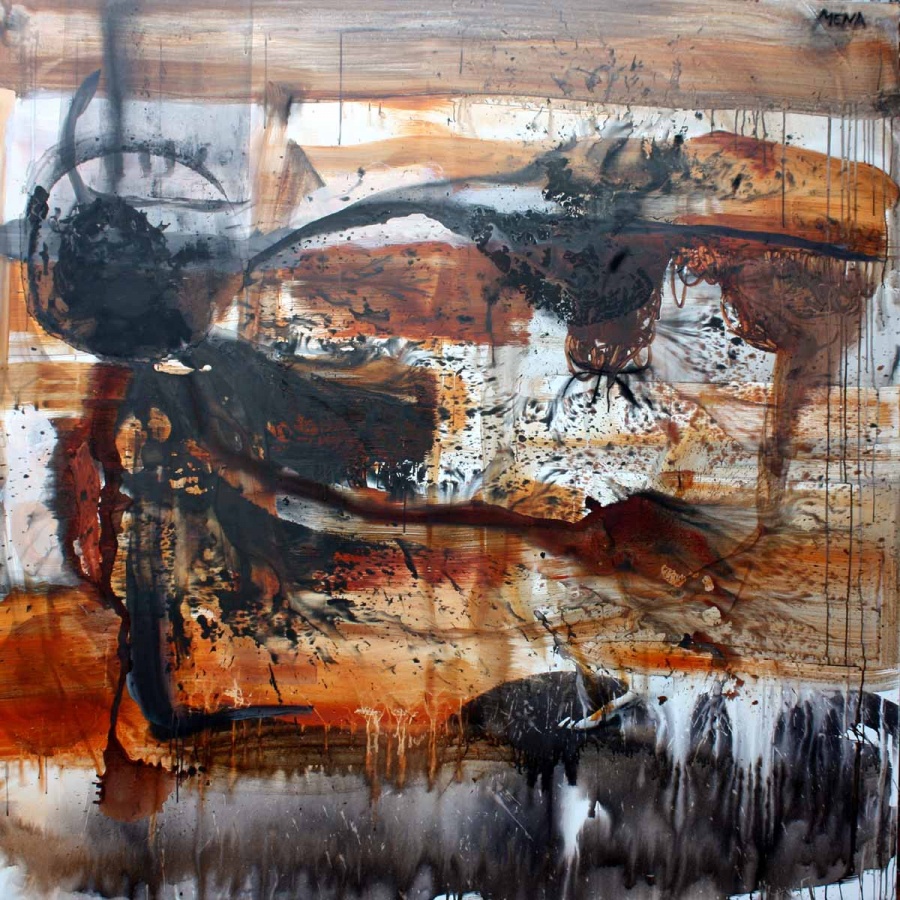 In this quick overview. we cannot ignore an event: the opening in 2011 of the exhibition La otra realidad: una historia del arte abstract cubano (The Other Reality: A History of Cuban Abstract Art) in the National Museum of Fine Arts (Museo Nacional de Bellas Artes), which brought together works by Cuban abstract artists created for more six decades, all under the curatorial criterion of Elsa Vega.

Important personal and group exhibitions were held in La Acacia Gallery, at the Wilfredo Lam Center (Abstract May), and in different institutions linked to culture. Abstraction has also occupied spaces at the Biennial of Havana. Some examples: In the Eighth Biennial, the exhibition Abstracción viva (Live Abstraction) was shown (at the Center for Preservation, Restoration and Museology, CENCREM); in the Eleventh Biennial, there was the exhibition De lo vivo a lo pinta´o (From live to painted), and most recently, in the Twelfth, Gritos del silence ( Shouts of Silence), and also several individual exhibitions, such as: Mi segunda piel  (My second skin), by Julia Valdés; Overwhelm, By Enrique Báster; Inventario (Inventory), by Carlos A. García de la Nuez;  Through, by Carlos Llanes; RAK 4200, by Rigoberto Mena; Abstractivos, by Pedro de Oraá, Rompecabezas (Puzzle), by Andy Rivero; Made in Cuba, by Juan Arel; Work in Progress, by Jorge Luis Santos; the collective exhibition of photography Quiero ser lo que puedas ver (I want to be what you can see), and some of the sculptures of the Exhibition Perfiles de Acero (Steel Profiles). All these in the macro-exhibition  Zona Franca in the Morro Cabaña complex.