ArteMorfosis is a gallery for Cuban art in Zurich. It’s aim is to make the work of contemporary Cuban artists accessible to an interested audience. ArteMorfosis initially focuses on well-established Cuban artists, with proven international track records, but who remain yet to be discovered in the German speaking part of Europe.
The gallery is a piece of Cuba in Zurich; it irradiates Cuban warmth and transmits Cuba’s carefree nature, joy of living and wealth of improvisation to the visitor. Strong coffee, a drink of rum, music, and at times too many paintings hanging on the walls create an atmosphere like the one you also find in Cuban private galleries. While it celebrates distinctive Cuban characteristics, the Gallery finds ever-new paths of its own: ArteMorfosis is self-confidently different, and is aimed at like minded visitors.
The name “ArteMorfosis“ and the spring-like ‘M’ in its logo symbolize the gallery owners understanding of the creative process. In metamorphosis a butterfly – from larva to cocoon to butterfly, to laying eggs and again to larva – steps through an eternal biological development cycle. A comparable cycle exists in art: an artist, inspired by his culture, his environment, experiences and intuitions, creates a work of art with paints and a canvas, presents it to the public, sells it and uses the proceeds for his next work. The gallery is dedicated to the part of the cycle in which art is presented and sold.
Participating in a cultural development cycle that still has no name, the gallery owners without further ado named this cycle and named their gallery, “ArteMorfosis“.
The gallery considers itself as ambassador of Cuban art in Switzerland and a meeting place between art creators and collectors. Its first priority is to promote the lively, creative work of Cuban artists, since Cuba is (still) today a little-known art market. The country’s transformation and opening provide vast opportunities for the discovery of – in Switzerland hitherto unknown – art treasures. 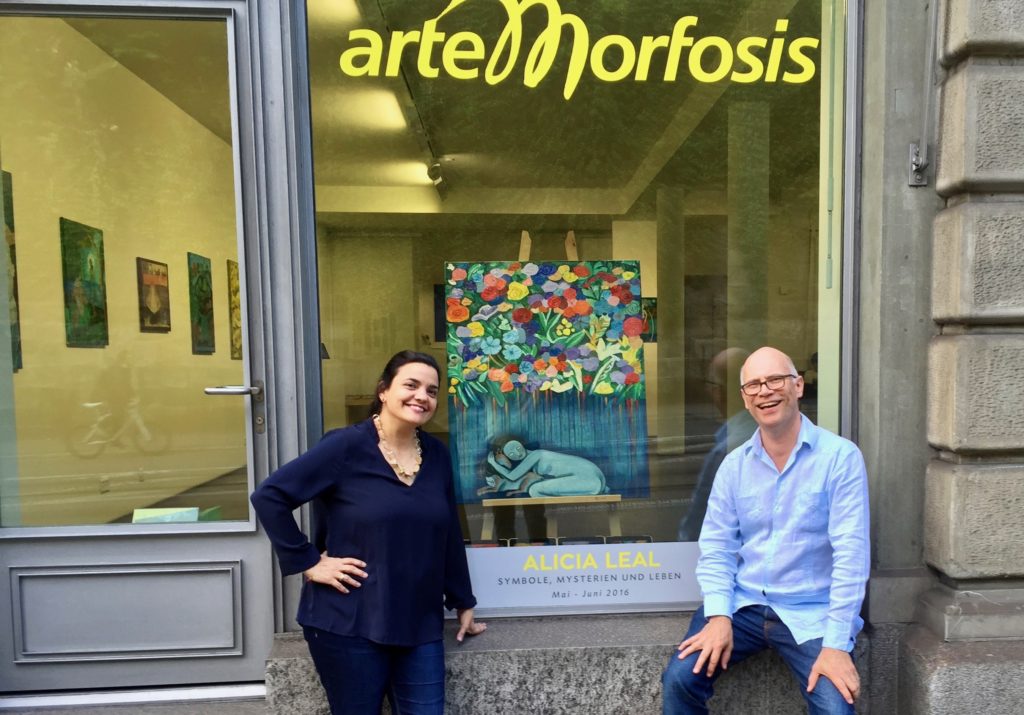 Idalmys and Johann Burkhard in front of Gallery

Idalmys Burkhard – García Negrín (1967) was born in Cuba. She grew up in a culturally interested family; her father was a founding member of the Cuban National Chorus and throughout her working life her mother was involved in different activities connected with the theater. Thus, performing artists were frequent houseguests.  As a nurse working at higher level art schools for many years, she was able to stay in touch with the artistic community. She lives in Switzerland since 2002.

Johann Burkhard (1961) is a Swiss Internet pioneer. As co-founder of the Internet comparison website, www.comparis.ch, he quickly embraced the potential of the new media and was one of the few who achieved commercial success. For the last 13 years he has operated a classifieds portal, www.cubisima.com, which ranks amongst the most used websites in Cuba. Idalmys and Johann are married since 13 years and have a 10 year old son.