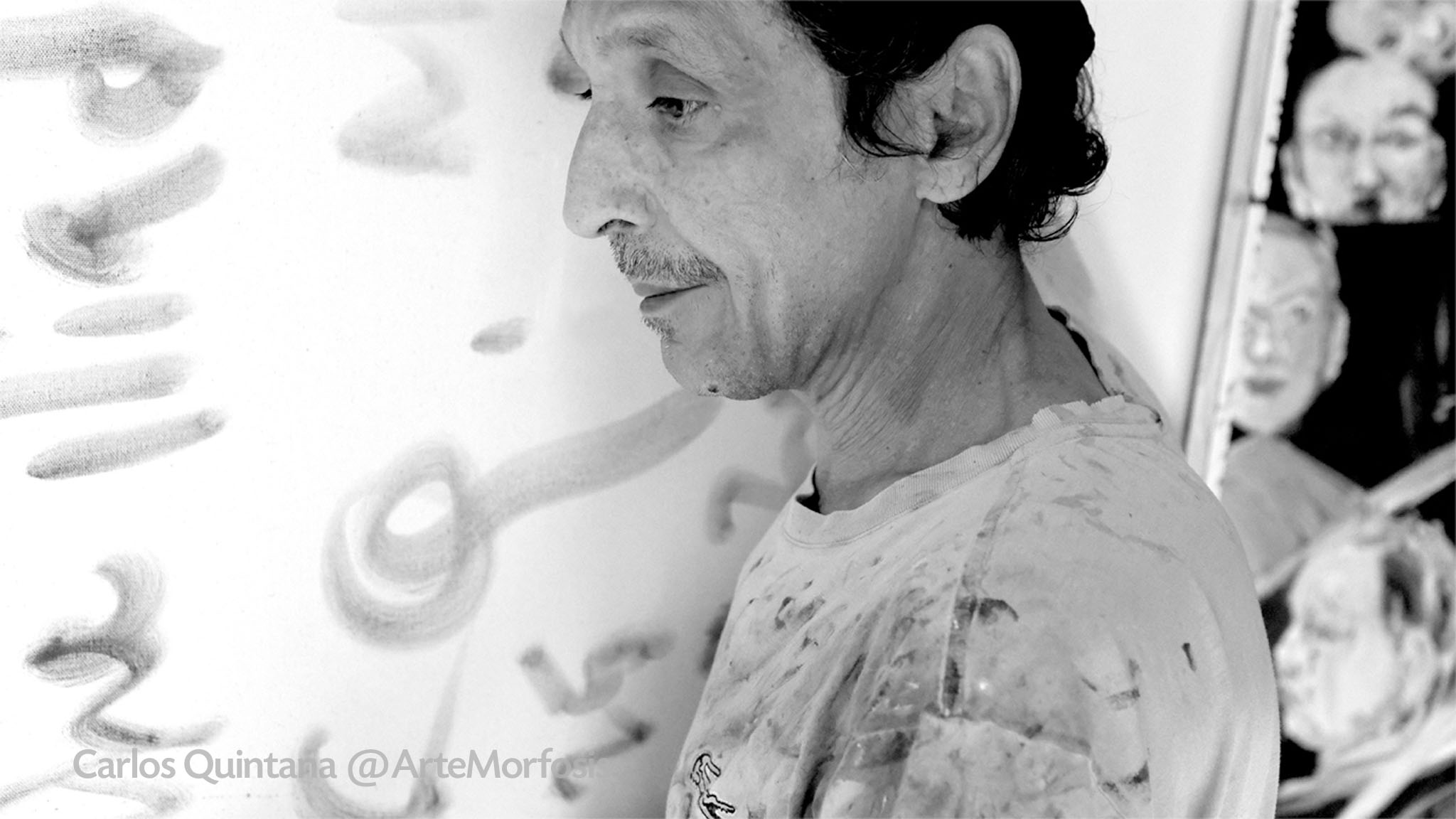 Carlos Quintana (*1966, Havana) began his artistic career as a sketcher and painter in Cuba in the early 1990s.His pictures from this period show clear features of neo-expressionism.At the time, this stylistic orientation was characteristic of other contemporary painters in Cuba.His works showed the influence of paradigmatic artists such as Schnabel, Baselitz, Kiefer and Kippenberger.Nevertheless, Quintana was not granted a rapid rise in the national art scene of Cuba.One reason for this was that as a painter he was formally traveling on alternative paths and did not participate in collective projects.He was a kind of renegade “underground” artist. His pictorial works included disturbing codes and discourses, as well as an almost obsessive interest in bearing witness to those offensive life pages that also showed the violence and the filth of everyday life. 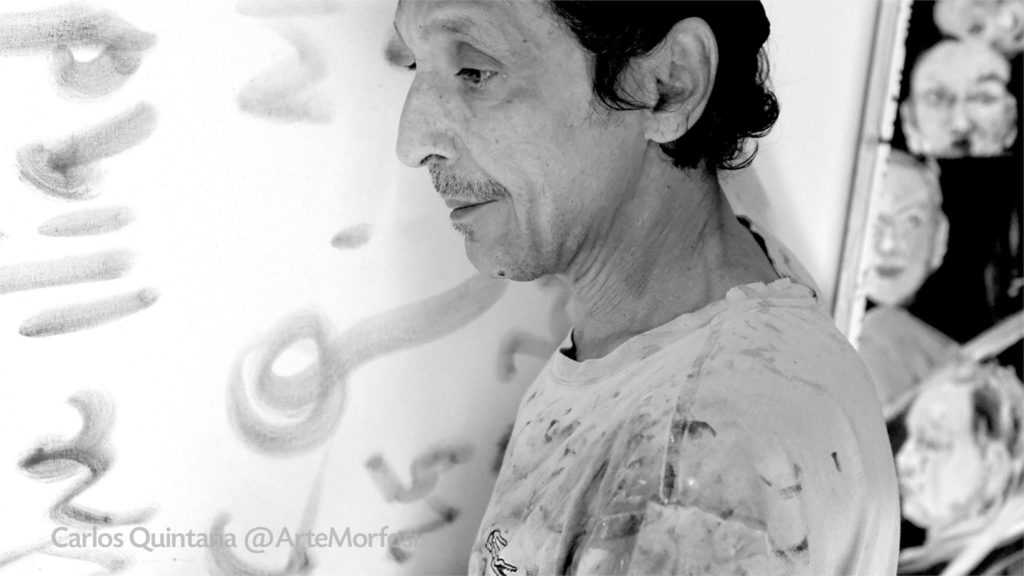 In 1993, Quintana met the Spanish gallery owner Ángel Romero. With his help, he was able to travel to Spain and settle down there. In 1994, Romero invited him to take part at the “Feria del Arco” and there he successfully introduced himself into the international art scene. From Spain, interest in Quintana´s work gas grown in other countries, too, so he exhibited his paintings in the United States, Mexico, Germany and France.  Like many other Cuban, exile artists and intellectuals, Quintana first in gained fame and recognition abroad, before becoming successful in his own country. In 2006, his “Lateralidad cruzada” exhibition in the Galería Habana, directed by Luis Miret, successfully placed Quintana in the Cuban artistic scene and became a reference artist for the local neo-expressionist painting.

The process of integration and artistic legitimacy started first from a morphological perspective. Technically, Quintana offered overwhelming evidence about his potential as a sketcher. Here, I refer to his drawing procedures, which serve as a basis and design, and then continue to work with gestural brushstrokes, dripping, with tonal gradations, with a glaze color and different fillings. The eclectic and polished treatment of his compositions and the anarchical symbolic connections that pose its individual visual illusions and his resourceful representation of objects, and especially of people, shows that he is part of both the classical and contemporary artistic currents. His work shows modernist as well as traditional features. All that explains his important role in the artistic Cuban world. This way, Quintana´s work changes into something pagan, ceremonial and at the same time, thanks to its new free and relaxed brushstroke. Very important and obvious to him is the fusion of the simple geometry of Afro-Cuban iconography with a gesture that refers to the curvy oriental line. The combination of these two elements is one of the typical characteristics of Quintana´s artistic mastery. At the same time, in contrast to this way of uniting different symbols, there is a symbiosis of ciphers that he has brilliantly integrated into his work for a quarter of a century. These symbols have developed a life of their own and reveal the Cuban cultural roots from which they come.These roots are obvious from time to time, which makes the viewer amazed.This is Quintana’s contribution to Cuban painting.The young painters of Cubamay notdareto follow Quintana’s stylebecause of their restrainedmanner, although his influences are evident in their works.It is Quintana’s independence as a bohemian what they could not directly adopt for themselves in this way.

Symbolically, Quintana’s works fit very well into the evolution of Cuban art.His involvement as a paintershows atypicaltraits that other artists such as José Bedia, Elso Padilla, Rubén Torres Llorca or Santiago RodriguezOlazabal have also followed.Quintana, however, has something unique in his work that does not exist in the complete artistic stream surrounding him: the dialoguebetween what is mystical and secularization. Quintana uses the most diverse symbols and codes side by side, and they have their origins in the African andEasternreligious worlds.We might think that the sole reason for this is a free (and liberated)extraversionto the symbolic heritage that accompanies the artist.This is also the source of an important recourse to our own cosmos, with its ciphers and symbols, in which the anarchy of thought and life finds a significant expression.

Apart from this vast amount of cultural roots, the works of Quintana have uncovered new arguments and formulas that allow an encounter between past and present, the ancient and the contemporary.His works contain a voluptuous freedom and at the same time a local bond, which are reflected in the symbols he chooses.It is about a kind of reference that allows us to reflect on the influence of history and, at the same time, toenlightenus about theglobal significance ofthese cultural origins, which are independent ofgeography.

Before he appeared on the Cuban art scene, other artists have already left their mark on the new adaptation, which suggests a rearrangement of Eastern and Caribbean iconography.At the same time, another group of artists has sought in a much more reduced way a more direct comparison of cultural and ideological prescriptions.Many of these artists could only make limited markings as they explored concepts of Hinduism and Buddhism, as well as the influence of yoga and Zen.I believe that this bias has a legitimacy that is more rational than physical, more gnostic than representative.

With the new attention paid to painting in Cuba in the period 1990-2000, these tendencies have reawakened and left other traces in the specific areas of the creation of symbols, especially in the two-dimensional work of Quintana.He was also one of the pioneers of this flow.In any pictorial composition of Quintana, we can capture a plethora of emblematic symbols that occur both individually and as a whole.They are unique in this way in the fine arts of Cuba at the end of the last century.The African andEasterntrait of his work are what captures the eye.His work repeats the presence of different animals, a surrealist mix of atypical creatures of aspecific ethnic and religiousorigin: dog, ram, horse, camel.A clear assignment of these attributes is not possible: they overlap in his work, obviously.

Quintana makes drawings of groups of people standing or in motion, sometimes showing data about them, a Tibetan monk or a samurai.However, these can also be thought of as being for other people who could come from an Afro-Cuban or Buddhist environment.In the phantasmagoric references, we usually discover a real person from everyday life (a friend, a girlfriend, a relative …).There are also traces of anepic or mythologicalperson.The heads that the viewer sees emerging from his images often have the physiognomy of a Buddhist statue or resemble a Creole prototype oftheElegguà, an Afro-Cuban deity.

Everything is related, casual, superimposed in a present and representative logic.That is why I do not want to put his work on a single interpretive pedestal.If we look at a reevaluation of his work today, we can see the force and speed of Quintana’s formal transitions and cross-cultural leaps that always have a spiritual edge.The titles of his works are very indicative of this phenomenon.These short explanations or exclamationsreflectthe intimate look ofthe author’scircumstances.

Carlos Quintana has recently focused artistically on abstraction, on various image carriers such as canvas, cardboard, mirrors and in the context of installations.He recently opened an exhibition entitled “Quintana abstracto” at the “Gran Teatro de La Habana”.Here not only the works are abstract, but also the arrangement of these is hermetic and enigmatic.I think that his abstract works can be deduced from his method of assemblage and his intensive work as a sketcher and painter.Many of his earlier paintings already suggest this step into the abstract.Some time ago, I noticed that his pictures “emptied”, things and objects began to float in them.Added to this was his gestural attitude: all this prepared the step into abstraction.

There is no doubt that his pictures still tend to be figurativeExpressionism.The current exhibition at the Swiss Galerie Artemorfosis in Zurich particularly emphasizes the human figure, the female nude and the portraits.Quintana has a unique talent for these genres.All his portrayed figures seem to be taken from everyday life, they reflect, claim their legitimacy, show their fear, a scar, or even constitute a surreal delirium. On the one hand, Quintana iscosmopolitan,on the other hand, a regionalist. From another perspective, he is a performer who clings to a ritual, preferring interventions and installative pieces.His pictures appear clearer from a distance, giving the impression of a flight of the Creator.In the process, foreign certainties also manifest themselves in his artistic work, thus creating a distance to the viewer.At the same time, Quintana seems to cling to its cultural roots to nourish our throats with this confusion.